Slowly But Surely: The Real Life Training Diary of a New Tri Mom

Aviva Singapore 70.3 was my very first half ironman triathlon in September 2007. So I think it is quite special that I had the perfect opportunity to do it again as my first triathlon race post-pregnancy.  I came and went to the race venue like a blur, just like my life has been the past couple of months. That is what happens when you are taking care of a newborn.

Dan was racing too and we had meant to take Dash with us but since his passport could not be processed in time I decided to fly in just before the check-in and leave right after the race. I am very thankful to my sister Sinag for helping take care of Dash overnight. I carried my breast pump with me and used it every 4 hours, and on race day I pumped in the changing tent before transition closed and soon after I crossed the finish line! 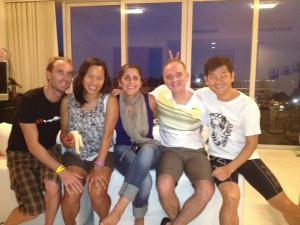 We were very lucky to have been hosted by lovely couple Ebbie and Sheri Baghaie, who are fellow triathletes.  They had another guest triathlete, Jogger Joel, who is a real character ( http://joggerjoel.blogspot.com/ ) ! Check out how he sets up his nutrition on the go… 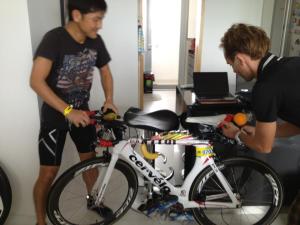 I am very happy to have finished my first triathlon back… I just checked my logbook and my average number of training sessions per week was 4x…sometimes less! I barely swam but since I knew I would finish the swim either way I was not too worried. When I had time I would prioritize biking and running. Sometimes I was only able to run once a week. Not ideal but I am just telling you what is in my logbook. The one thing I got going for me is the fact that I had some stocked knowledge from years of racing and bags of confidence, haha! 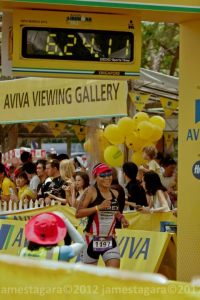 TRAINING HIGHLIGHTS FROM Zero to Seventy-Point-Three…

Well that about sums up my road back to fitness so far. I am still progressing day by day but the main priority for me now is for my baby to be healthy and have a good loving environment. Luckily his Dad is very supportive of my work and training and is very hands-on with Dash as well.

Up next this year is a full Ironman and the NYC Marathon. Looking forward already!

P.S. Special thanks to Icon de Jesus and James Tagara for the race day shots!

‘Just get up and run’

Triathlete Ani de Leon-Brown has been active all her life—until she got pregnant and had to slow down. A 10K used to be an “easy run,” but three months after giving birth, she could hardly run for four minutes straight.

“It was very hard for me to get back to my former speed. My first run was just four minutes, and the next was 10. After three days, I was able to complete 10 minutes, then 15,” she explained. “The thing with running is you have to slug it out for the first two weeks, then it will get better—and you will feel better.”

The new mom is a three-time Philippine National Triathlon champion and the first Filipino woman to join the Ironman World Championship in Kona, Hawaii. She is promoting an active lifestyle not just for women, but for the whole family, reminding everyone that getting active means having energy to do more things.

Ani is one of the partner athletes in Unilab’s Active Health campaign. She and husband Dan, runners Rio del Rosario and Jaymie Pizarro, and cyclist Raul Cuevas recently gave a talk on how to start and stay active.

The event, held at Holiday Inn Galleria in Ortigas, Pasig, also introduced Unilab’s lineup of sports activities for the year.

Active Health is the fitness division of Unilab Laboratories, Inc., a 65-year-old pharmaceutical company (among its brands are Enervon, Alaxan, Myra). It has been hosting the Run United, Bike United and Tri United events since 2010.

Registration fee is from P350 to P900, and part of the proceeds will go to the Gawad Kalusugan (the health program of Gawad Kalinga) and Hero Foundation. Organizers said joining fee covers logistics cost.

Unilab Active Health head Alex Panlilio said Run United focuses on gathering family members of different fitness levels; that’s why it has a 500-meter dash for kids, and more competitive 5, 10 and 21K distances. “We call it a ‘family run’ because we believe that if someone in the family is into fitness, he can influence the others. And running also provides family bonding time.”

Panlilio recently did his first triathlon. He considers himself a beginner.

“I was into basketball when I was younger, but there came a time when when I let myself go,” he said. “I tried running 5K and I couldn’t even get past a kilometer! That’s when I decided to train.”

Since running calls for a lifestyle change, Panlilio said it is also important to surround yourself with people who are into it.

You are never too young or too old to get active; it is a matter of getting started and keeping your activities exciting.

Kids can be “programmed” at an early age, said Ani, while it’s more of mental and physical conditioning for adults. “I know it is very hard to get up very in the morning, so it is best to join a group so that you can follow a training time and routine.”

Ani, also a coach and trainer, said you have to set realistic goals, then work on how to sustain it. Her tip: Work around your schedule, find time within your work and family life, identify goal rate, and slowly build up your runs around it. Prioritize. Being too busy is not an excuse, because “if you want it hard enough you will find a way.”

Pizarro, a mother of two and publisher of The Bull Runner Magazine, said running is a convenient way to get fit, especially for multitasking women. “You can squeeze in outdoor runs in the morning. If it’s too hot in the daytime, you can run on the treadmill; at night, you can run with friends. It is very flexible. Make sure running won’t be hassle so that you wouldn’t easily give up.”

And while running complements your life, you should never forget to have fun.

“I can be very competitive,” said Pizarro. “So my weekday runs are fast, while my weekend runs with friends are more relaxed. We don’t worry about time  and personal records, just what we’ll be having for breakfast afterwards.”

Pizarro is organizing the Bull Runner Dream Marathon on March 18.

Ready to run? Now keep these in mind to avoid injuries.

Preparation is key, said Dan, a 15-time Ironman finisher and former coach of the Philippine Triathlon team. Follow a progression and build your speed slowly. Don’t overdo it.

Del Rosario said passion is good, but you don’t have to be too aggressive. Start slow. Your initial goal should be to finish a 3K run-walk until you can run the whole length. Do this until you can finish 5K without walking. Also, find out your foot type (flat-footed, high-arch, neutral) and invest in proper running shoes. His RunRio race company organizes all Unilab Active Health events.