This morning Filipino Triathlon Champ Arland Macasieb and Bobbit Atendido hosted an informal run session with friends in the village. It was very enlightening for the runners and we even got free trial shots courtesy of Athlete Octane (and, it being a Coffee Run, also coffee)! Running and Triathlon are sports for the individual but I love that it also has this kind of collective group energy 🙂

How I gained weight and found myself on the cover of Runner’s World Magazine….

Sometime late January this year, I got a call from Runner’s World Editor-In-Chief Marie Calica. She asked if I could drop by their office and studio for a feature. I said, “sure!” without thinking too much about it. So come early Feb I went to the Summit Studio with Dashy in tow, and lo and behold: I was informed then and there that I would be their Cover Feature.

Marie and Angel Constantino told me they did not want me to feel pressured which was why they didn’t tell me sooner. My baby was just two and a half months old then so I was still not back to my normal weight. Far from it. I took it in stride but deep down I was thinking, “Err….COVER? Right Now? Are you serious ???” Please don’t get me wrong, I didn’t have an issue with the extra weight I had, and I was on the way to getting back into shape, in my own time. But as a lifelong athlete, I loved this magazine, so forgive me for wanting to look good in it!

Thank goodness the camera and styling crew were real pros, and Adidas had supplied me recently with loose-fitting outfits! This is the one time I had hoped they would “photoshop” any unflattering bits. The actual cover shoot was quite funny, which found yours truly inhaling sharply and deeply on several (okay, maybe like 50) occasions just to get my tummy to look flat. Not only that, they did not tell me this but I think it took them some time to configure which top and bottom would have the most coverage. Haha 🙂

I had to wait a couple of months just like everybody else to see how the photos came out. I was resigned to the fact that I had just graced the cover of one of the most iconic sports magazines not looking my best.  When I finally saw it I had to send the Runner’s World crew a thank you message saying thanks for editing it so that I didn’t look that bad (read: fat)! According to them, I was mistaken because they didn’t even need to edit the photos that much. Well, I’ll never know if they were just saying that to be nice.  But here it is, plus the featured article inside.

In hindsight, I am impressed that they chose to go with a subject who was not necessarily skinny. Runners do come in all shapes and sizes, and I am happy to represent in whatever manner  (see blog: https://anikarina.com/2009/07/03/becoming-a-runner/).

Thanks for entrusting me to be on the newsstands, Runner’s World Philippines 🙂 It’s a real honor! 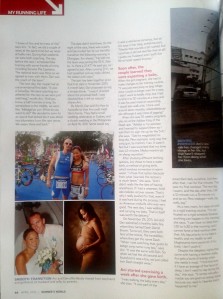 I just realized I never had the chance to post a picture of my sweet new bike on my website… well here it is! I am a happy owner of the Team Timex Issue Quintana Roo CDO.1. It came with a PRO bar, Shimano Cycling components and Challenge tires as well! We are going to cover lots and lots of miles with this baby 🙂

In love with my Yurbuds Sports Earphones!

I don’t do product reviews very often because I only really like to write about things that I believe in. Not too long ago my very good friends Maiqui and Gianina Dayrit brought in these amazing sports earphones that have upgraded my workout music set-up… fits perfectly, doesn’t fall off, and the designs are pretty cool as well.  Love my Yurbuds!

Check out these pink ones girls! But they normally come in red 🙂